Hi Jordan! Can you start off by setting the scene for us - what were you doing before your apprenticeship?

Hey! Before I started on the level 4 Data Fellowship I was working at Scope, a disability charity. I worked in their database team, so predominantly my role was following processes where I’d collect data, transform the data through Excel and then import it to a database. It was a pretty admin heavy role where I followed a lot of processes that had already been built.

And so how did you find Multiverse or how did they find you? What was your journey to an apprenticeship?

I got asked by my line manager if I was interested in doing some training courses, I wasn’t too sure what it would be like or about but I said I’d definitely be interested. I then had a conversation with Multiverse and they spoke me through the Data Fellowship course and what it entailed, I really liked the sound of it so I started that in December 2019.

And what was about your first apprenticeship that made you want to progress onto a second?

There were a few reasons why I knew I wanted to progress onto a second apprenticeship, the first was that I learnt so many new technical skills such as SQL. I’d heard of it but I never really understood what it meant, my line manager at the time knew a little bit about it, but we did some workshops on it and I also bought some books, as well as some online training courses for my off the job training hours and it just benefitted work so much. For example, there were processes where I’d have to generate a report every week and I’d do it using our database in plug-in query builder but once I started learning SQL and learning the back end of the database, I was building these elaborate building these elaborate queries in SQL that I could just run every week. It saved so much time and made it so much more simple. I even started doing it for other people on my team and I was saving one of my team members 5 - 6 hours of work a week by writing one query that amalgamated a couple of tasks. It made work a lot easier and I felt myself become a valued member of the team and I saw myself starting to progress from a junior member to a ‘go-to’ person with these technical skills.

I also noticed a similar progression with terminology and stakeholder engagement, because I was improving technically, I had more to say in meetings and I felt more confident in my skills. I started doing more complex things, with a big help from Olu (my coach), I started learning Python, a programming language. This really helped me when we had issues with cancelling people from a payment platform, we would have had to manually cancel around 3,000 people which would have taken days, instead I wrote 10 - 15 lines of code which went in the back end of the website and it cancelled them all in about 20 seconds. This was a clear quantifiable win for myself and for Scope, now I’m getting asked to lead on projects and get involved from the inception of new revenue income streams which is a huge step up from where I was two years ago.

And finally, I have a History degree from 8 years ago which I’m not actually doing anything related to in my role, whereas with the level 4 data apprenticeship, I’ve got a quantifiable qualification that says I can do Python, Excel, SQL etc. Additionally, not many people have a technical degree, so the degree apprenticeship was a no brainer for me. 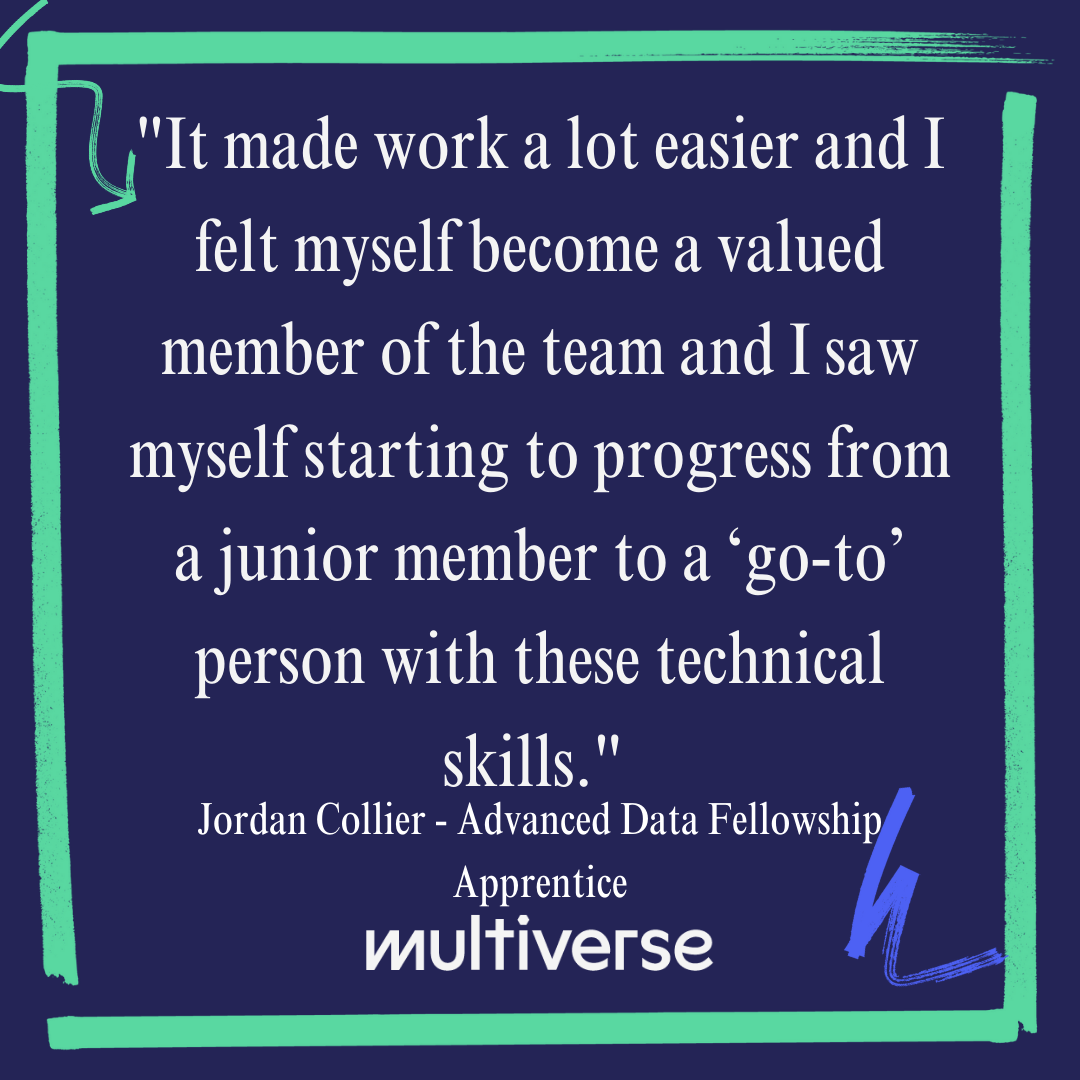 Now looking at the practicalities of progressing from one apprenticeship to the next, how did you approach this with your line manager and Multiverse? Did you face any obstacles during this process? How did you overcome these?

So my coach actually mentioned the advanced data fellowship course to me and it was something that I was really interested in but my line manager was actually off at the time so I had to go to his line manager. However, he didn’t know too much about what I’d been doing and so I had to do a bit of a sales pitch where I was selling myself and what I had been doing on the previous course. I explained that going forward it’s not that I’m losing a day a week to work because most of the work I do is using organisational data and when I’m doing analysis, I’ll be doing it on our donations, incomes and sales. This was definitely the main challenge, but once senior management had confirmed I could go ahead with it, it was plain sailing from there.

What would be your advice for anyone currently thinking of progressing onto another apprenticeship?
I’d highly recommend progressing onto another apprenticeship, I’m only on module 2 but I was really ready for a step up. If you’ve enjoyed the first apprenticeship then the next apprenticeship is only going to be a good thing, you’re going to be more qualified, you’ll start seeing more quantifiable benefits to your organisation and it’s going to improve your career prospects. It definitely is a step up from the level 4, the assessments are every 6 / 7 weeks so you’ve got to be prepared and you have to make sure you do the pre - reading.

A Multiverse apprenticeship aims to deliver skills of lifelong learning, networking, and opportunities to connect with like-minded individuals. How are you using the Community to help you in your career?

I use the Community to network, I’m still in contact with people from my first apprenticeship and keep in touch with them on LinkedIn. I’m also on the mentoring programme, mentoring another apprentice on the level 3 Data Literacy programme which is really rewarding and I had some really great people in my organisation who helped me so I know how beneficial it can be.

If you would like to know more about progressing onto another apprenticeship, take a look at our Progressions page!